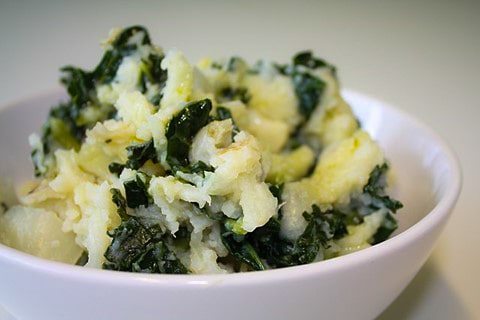 Colcannon is one of Ireland’s simplest dishes in terms of ingredients and preparation, and it remains so popular today, appearing on many an Irish menu and many an Irish dinner plate. Made up of mashed potato and cabbage/kale, this dish is one that Irish people love to add to any meal, especially alongside boiled ham or as part of an Irish Sunday roast.

Colcannon is typically a side dish, but I will always remember my mum preparing a big batch of this to consume on its own – she just loved it, and still does. There are no rules when it comes to this dish, and because the ingredients are so simple, you can make it your own by adding certain ingredients to intensify the taste, which is what my family would do.

My mum loved to put dollops of Irish butter and plenty of salt and pepper, while I loved to add in spring onions, which made the two versions perfect for us. My granny on the other hand would make it the traditional way with potatoes, cabbage, butter, and milk, but with added bacon bits, which was always a winner in our household.

It is not unusual to see this side dish ready-made in many supermarkets, which just goes to show that the market for colcannon in Ireland is truly alive and well. Due to this recipe being one of the easiest ones there is, there is no reason not to give it a go, so keep reading for my ultimate colcannon recipe.

Colcannon is largely associated with St Patrick’s Day in Ireland, not only because it has elements of green throughout, but because it is one of the most traditional – and simplest dishes to prepare, however, this dish is commonly eaten throughout the year as well.

Firstly, you might be wondering where this unusual name came from, so let me delve right into that before going further into the history of the dish. Colcannon comes from the Irish words ‘cál ceannann’ meaning white-headed cabbage and can come in various forms depending on the region in Ireland.

The basic ingredients are potatoes, butter, milk and cabbage, but traditionally many people have added in extra ingredients varying from household to household, so you may find colcannon with added spring onions, leeks, chives and onions. Irish people began making this dish because it was simple and cheap to make, yet filling and nutritious, but the dish has stuck around all these years because of its delicious taste and the significance of an old Ireland.

The dish goes back to the 1600s when the three basic ingredients of potatoes, cabbages and leeks were readily available, cheap to buy and ultimately delicious when mixed with some herbs and spices, so of course, this dish went on to become a popular one.

Colcannon was once known as the food of the common man, but today you can find this dish in almost every type of restaurant, supermarket and household, served alongside many other traditional Irish dishes. Traditionally, and in some households still today, this dish is served around Halloween time, and it is not uncommon to come across hidden symbols of fortune and luck within the mash, so it is recommended to eat slowly. This dish is rich in Irish mythology and folklore, and back in the day, it is said that unmarried women were sent into the garden to pick the cabbage, later to find a ring hidden in the colcannon.

This is a very easy recipe, so if you want to try it out at home, take a look at the simple steps below, you won’t need many ingredients to get started.

Some variations of this dish include, adding in some crispy bacon bits, and some leek or chives, so feel free to add this to the mixture if you want to add some extra flavour.

I'm Jade Poleon, a food lover and food blogger. I specialise in traditional Irish food and love to share my recipes so others can taste delicious Irish food.